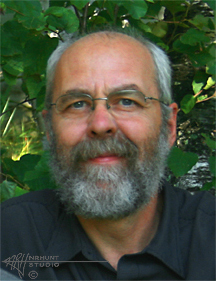 I was born and raised in Northern Minnesota. Since the age of five, I have been studying, making, and appreciating art. As a young man I studied the arts extensively and apprenticed with my father as a carpenter and woodworker. He taught me the value of traditional craft-work and the sense of connection and satisfaction that can be derived from working with our hands. He was my “Zen master”. We traveled the Dakota prairies in our re-dedicated 1957 bug-eyed Bookmobile, working from job to job. We approached our work philosophically; and we enjoyed it. Carpentry was a family tradition for generations and I found it to be a valuable extension of my arts training.

In 1984 Tori and I married in Norway. We then moved to Sedona, Arizona where I soon started making belts professionally, working with a friend who made, what I thought at the time, expensive belts. They were hand-stained harness leather belts with turn-of-the-century, gunstock-like embossing. We supplied Bloomingdale’s, Macy’s, Neiman-Marcus, and the like. These belts had a blend of Eastern simplicity and American Western design. While designing for this line I was inspired by the incredibly fine and beautiful workmanship in old weaponry.

When the belt shop closed its doors, I decided to start making belts on my own. I wanted to make the finest belts that I could. I soon realized that would require learning to make my own buckles, so as to dovetail engineer the buckles with the leather straps as only a true belt-smith can. I familiarized myself with traditional regional and ethnic belt buckles over the years, largely by making custom belts for thousands of artist-made Western, South-Western, South-West Indian, and fashion buckles. The ones that impressed me the most were the Western, bright-cut engraved buckles. I remembered the gun-style engraving that I had really only seen in books, and thought that in order to make the finest belts possible, I should learn to do that style.

Having set out to learn gun-style engraving, I came to realize that it was a very difficult skill to acquire and would require many years of practice to grasp even the basics. Fortunately, my wife’s uncle, Ragnvald Frøysadal, was a master craftsman and lifelong traditional artist in the Gudbrandsdal-valley of South-Central Norway. Among his many other skills, he also engraved. He shared his enthusiasm for decorative acanthus scroll-work with me many times. When I told him of my desire to learn engraving, he made a couple of gravers for me, and showed me his method of engraving. Ragnvald mentored and inspired me in the engraving skills, and in the decorative arts’ design process.

Early in my engraving ventures, I also came to study under a master engraver from Austria. Franz Marktl is widely known in gun engraving circles as one of the best engravers now in the U.S. He decided to mentor me and taught me his Germanic style of engraving. Although, I’ve ventured into adaptations of design based on influences from Ragnvald and from historic masters as varied as Michelangelo to Georgia O’Keefe. More recently, through the Grand Masters Program at GRS, I’ve studied with the Creative Arts Team of Italy, and with Winston Churchill, whom I am proud to call my friend. I keep the old adage in mind; “Do not follow the masters, follow what the masters followed.

“What” to engrave is often best determined by examining “Why” to engrave. Making an object of beauty is always satisfying and hopefully will bring pleasure to those who see it for many, many years, ideally centuries. Such man-made beauty, the type seen in the decorative arts, is found in temples, mosques, cathedrals, museums, etc. The designers and makers have addressed the “Why” in their work through worship, discipline, devotion, and dedication. They worked with hand, heart and mind to express their love for creator and created.

The decorative traditional arts are deeply integrated into every culture and heritage. They vary from place to place and time to time, but they almost always are perceived as beautiful at a glance, and interesting upon examination. They mimic nature as examined through patterns found in mathematics, science and art. I believe that by seeing the beauty of patterns we can extend a faith of continuity that satisfies the soul. Beauty is a sort of truth despite, or because of its vagaries. It unifies us.

As an American, my own tradition is not well defined by my region or my era. Because of this, I’m not limited by tradition, yet I go to the “classics”, – thereby imposing the ultimate expectation, I suppose, but it helps me with “what” to engrave. Although, my canvas is belt buckles, I believe the finest design and workmanship in metal is found in the long history of weapons decorations. Those craftsmen walked the same path I walk, and I feel a kinship with them. We all try to raise our family on our labor, and that might be the most noble purpose of all. Yet, we look for more, we find it, and we pass it on.